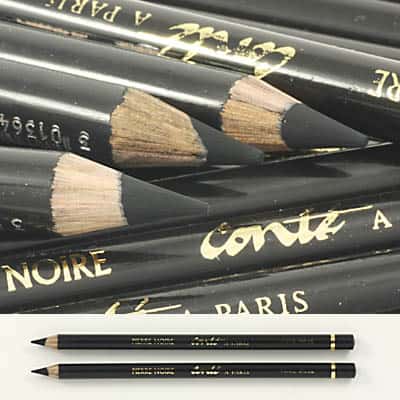 It took him exactly a week to invent the modern pencil

The life of Nicolas-Jacques Conté (1755-1805) is so interesting because the man always shows up where you least expect him. He is back in a recent book on battles in the Low Countries.

The illustration of a watercolor shows how seven men are busy with a large ball in a closed room. Below that is another print showing how to camouflage the ball by seemingly turning it into a tent.

The caption reads: 'A first during the battle of Fleurus in 1794 (in which the French revolutionaries annexed our regions) was the deployment of an observation balloon by the French army. A series of watercolors by Nicolas Conté shows how such balloons were made.'

But Conté did not only watercolor. He had made the balloons himself. He himself experimented with the techniques to let them go into the air and in this case he also came up with the idea of using them as an observation post.

Conté was born in 1755 near the town of Sées – where there is a statue of him – east of Paris. As a child he was good at drawing, he was apprenticed to a painter and established his name as a portrait painter.

His painting would be his main source of income for many years.

At night, however, he carried out chemical experiments and tinkered together all kinds of tools. The French revolutionaries saw in him the ideal man to solve their graphite problem. Pure graphite only came from England and they were at odds with that country.

In March 1794, Conté was ordered to invent something within a week using a raw material from French soil. He took finely ground clay, mixed it with impure French graphite and baked it. In this way the pencil lead was made ceramic.

If you used a little more graphite, the lead became blacker, but softer. If you took a little less, the reverse happened. The clients were enthusiastic.

Conté, however, had more serious matters on his mind. Already in June the battle of Fleurus took place. At the behest of his wife and to please his brother Louis, in January 1795 he applied for a patent for the pencil, which was granted to him under
der Frans patent number 32. Louis set up a factory in Boulognesur-Mer, where the Conté factories are still located two hundred years later.

A first during the battle of Fleurus (26 June 1794) was the deployment of an observation balloon by the French army. The idea came from Nicolas Conté who drew this watercolor himself.

By 1798 the reputation of the self-taught engineer was so great that Napoleon took him on his Egyptian expedition as chief of technicians. Off the coast of Alexandria, Napoleon's ship ran into difficulties, after which it sank together with all the technical equipment.

Conté was immediately given the opportunity to demonstrate his versatility.

He constructed ovens for baking bread, mills for grinding lime, hydraulic machines and an optical telegraph. At the same time, he mapped everything, made endless drawings and watercolors.

Napoleon would remember him for that in his memoirs. 'Conté has all the sciences in his head and all the arts in his hands,' said one of the expedition members afterwards. In December 1805 he died at the age of 50 of a heart attack.

He is buried in the cemetery of Montparnasse in Paris. In a chapel of the hospital of Sées (chapelle de l'Hôtel-Dieu) you can still see woodwork painted by the young Conté. The Bic Group took over the Conté company in 1979.