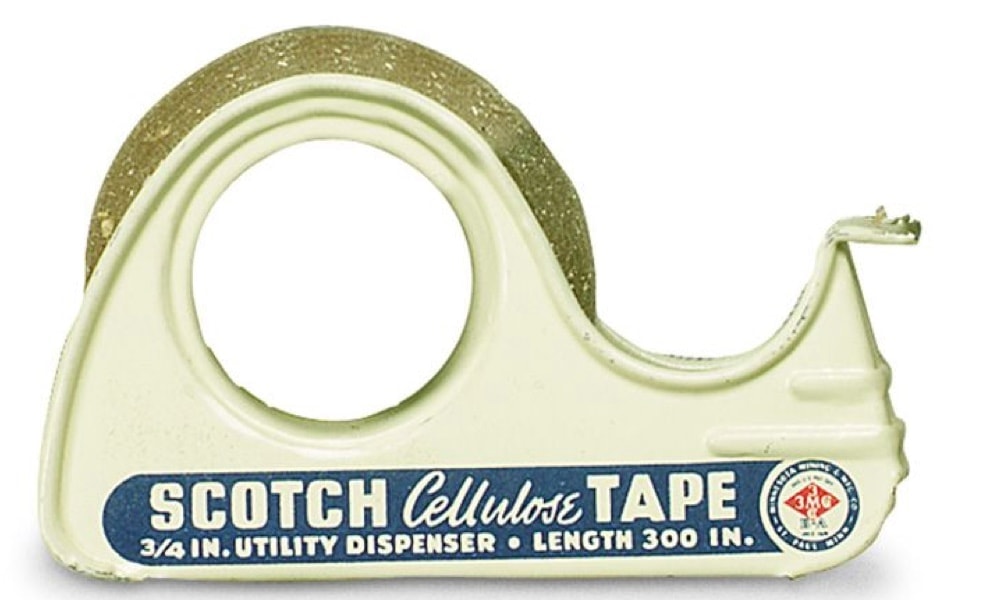 It has been established since October 2008: when Scotch tape is unrolled in a vacuum, short pulses of X-rays are released that are powerful enough to take a picture of a finger in one second. Researcher Seth J.

Putterman of the University of California at Los Angeles called the phenomenon "a kind of microscopic lightning." He carried out the experiments with Scotch tape from the company 3M because other brands show the effect to a lesser extent or not at all.

Part of the secret is also in the adhesive, but its composition is a 3M trade secret. Masking tape has not been tested.

This is what Richard "Dick" Drew of St. Paul, Minnesota, had yet to experience. He is the inventor of both masking tape and Scotch tape. Right, rightDick Drew (© 3MCo) direct contact with customers twice gave him a bright idea.

Dick Drew grew up in St. Paul, Minnesota. He liked to play with mechanical toys, took apart properly working watches as a child and once built a miniature railway in the garden. In his teens he took an interest in cars, but not remarkably more than his friends.

Mathematics and chemistry were his best subjects at school, but they failed to arouse a passion in young Richard.

His passion was playing the banjo, an instrument that belonged to every dance orchestra in the US in the 1920s.

After high school he earned some money with two orchestras and at the same time studied engineering at the University of Minnesota for two semesters. Playing music at night and studying during the day: he couldn't keep it up.

He broke away from college and found a full-time job as a musician; but after some time he applied again for a correspondence course in mechanical engineering.

At the same time, the Minnesota Mining and Manufacturing Company, known as 3M for short, began expanding its research lab. 3M just had a novelty ready for the market, namely water-resistant sandpaper, and its quality had to be checked. 3M was looking for someone as Drew described himself: dynamic, entrepreneurial, eager to get started.

He entered the service and was instructed to visit paint shops in St. Paul, distribute samples of the new sandpaper and record the reactions to it. In the roaring twenties, the craze for painting cars in two colors arose.

Car factories supplied them in two colors, older cars were painted over. Spray painting in two colors not only caused major problems in the car factories, it was hell in the small paint shops.

Sanding down the existing paint was an unhealthy, dusty job, and repainting meant that the colors had to be pin-sharp. This was done using newspapers and overly strong, old-fashioned adhesives that caused discoloration and tore off a piece of the paint when removed.

Drew witnessed a worker cursing loudly one day when some of the new paint came off a shiny Packard.

More mess led to more sandpaper being used, which helped 3M's business. On the other hand, sandpaper consisted of a backing, an adhesive and abrasive grits. If you left out the grains, what did you have? adhesive paper.

Drew, 24 years old and little more than a lab assistant, set out to find a material that would stick but still remove easily.

He started with plain brown wrapping paper and experimented for weeks. Until then 3M vice president William McKnight ordered him to stop his search. The water-resistant sandpaper, 3M's very first innovative product, was a priority.

Drew did stop. But 24 hours later he had a new idea: crepe paper backing! And he continued his experiments, ignoring William McKnight.

One day he entered the laboratory in the middle of an experiment. He looked at Dick Drew, watched what he was doing, and then just kept walking. A few months later, the young man needed an expensive machine to manufacture his masking tape.

McKnight said there was no money. Below $100, Drew was allowed to make purchases on his own responsibility.

He set up a stream of $99 purchases, and when he demonstrated the machine to McKnight months later, he ruefully confessed how he had done it.

What McKnight thought then can be seen from one of his management theories that he preached and applied for the rest of his life at 3M: "If the right person is on the right project and if he is committed to finding a solution, leave him alone." .'

A glass of bad whisky

3M was a very strange company. It was founded in 1902 by a doctor, a lawyer, the owner of a meat processing plant and two railway directors. The basis of their financial partnership was a mine of the corundum mineral they had purchased.

And corundum provided the right grains to produce perfect sandpaper. Until it came to light that some expert had been mistaken about mineral.

So that the company unexpectedly had to purchase its main raw material. In no time, the mining company that owned the wrong mine was deeply in debt. By 1904, two shares in the local saloon could just buy you a glass of bad whiskey, the records say.

Today they would be worth $340,000. Because workers contracted lead diseases while sanding the paint, a disease that was widely known and feared, an ink manufacturer in Philadelphia came up with the idea of developing a water-resistant sandpaper.

The water caught the dust and the sandpaper lasted longer. He asked 3M to send a supply of abrasive grit.

That he ignited other needs of his customers, that was only his merit.

His first deliveries of two-inch-wide crepe paper-based masking tape stuck only to the edge. You then needed less adhesive and the tape was also easier to remove.

Drew witnessed the tape fall off just as a worker was about to spray paint. "You need to tell those Scottish (Scottish thrift was proverbial) bosses of yours to use more glue," he growled.

This is how Drew – according to a legend that has never been officially confirmed – came up with the idea of calling his new masking tape Scottish tape, Scotch tape. Perhaps the only product in history to be named after a defect. Starting in 1925, 3M Drews Scotch masking tape was marketed.

He had been on it for two years. It was an instant success.

Meanwhile, an insulation manufacturer in St. Paul had informed 3M that it was looking for a new water-resistant packaging material. They wanted to insulate a hundred refrigerated wagons for trains. How could you protect the insulation material against moisture?

The day he watched a researcher pack an order of masking tape into a cellophane bag, Dick Drew wondered if you could put an adhesive on cellophane: clear, waterproof—that would be something. Just what he was looking for for the insulation company.

That combination, that insight, was only Dick Drew's merit: combining two elements that didn't immediately belong together. In June 1929, the first shipment of 100 meters of cellophane arrived. The first of many loads.

It was extremely difficult to spread the glue evenly, and the cellophane tore all too easily.

Drew came up with the idea of applying a coating to the cellophane first, and then the adhesive. On September 8, 1930, the first rolls of Scotch cellophane tape came off the press. They were still in tin boxes to prevent the glue from drying too quickly.

The insulation company had meanwhile found another solution. The new tape could be used to close the cellophane packaging of bakers, grocers and butchers. But due to the technique of closing with light heating, some of those customers also disappeared.

Just in those days, the United States was slipping into the deepest crisis of its history: the Great Depression.

And guess what: with that cellophane tape, the ordinary adhesive tape, you could fix all possible defects: broken toys, torn pages in a book, worn banknotes, clothes; farmers put the tape on eggs that showed cracks.

Ads showed women sticking an umbrella or a young lady hopelessly entangled in a pile of string wrapping a present.

The word 'Scotch' now stood for 'economical' and 'efficient', a dream brand name.

At a time when the US economy was collapsing, when thousands of banks and companies went bust, 3M tripled its sales. In 1943, Drew founded the "Laboratory of Product Manufacturing," of which he became director.

He laid the foundation for what 3M is today: $25 billion in revenue, 80,000 employees. And above all: 900 types of adhesive tape. Drew's motto was "Creatively connect 3M to customer needs."

In 1962 he retired. At that time he had 30 patents to his name. He retired to sunny Santa Barbara, California, where he died in 1980, aged 81. Two years earlier, he had been inducted into the Minnesota Inventors Hall of Fame.

On May 4, 2007, the national Inventors Hall of Fame followed.

Barely a year later, Professor Seth Putterman came up with the story that very small X-ray pulses from that 'Scottish' adhesive tape had wonderful applications.

For example, they can reveal the 'fatigue' of composite materials that are increasingly used in aircraft and cars. They show no visible weakness, not even just before they break. The shrewd banjo player from St.

Paul couldn't have believed it.